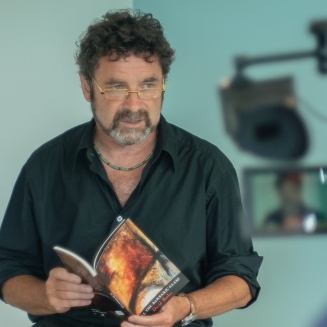 1. Like many Irish writers, you write across several genres. How do you decide which genre will best fit a particular idea?

Trial and error, I guess. I’ve often moved between genres while dealing with a particular theme or issue. My play ‘Blue Love’, for instance, is adapted from a single chapter in my (as yet unpublished) novel ‘Under the Sign of the Goat’. I have found that, where poetry is concerned, I tend to deal more directly with ‘life issues’, without the need to fictionalise.

2. You’re giving a workshop at BLF entitled ‘Writing for the Stage’. What are the biggest challenges specific to writing drama?

The American philosopher Santayana once said that where the novelist gives us the protagonist’s actions viewed through the prism of their mind, the dramatist gives us the protagonist’s mind viewed through the prism of their actions. This is the real challenge of dramatizing (as opposed to writing dramatic monologues which address the audience directly). Most people can write dialogue, but good dialogue alone doesn’t create drama.

3. Besides reading, do you have any hobbies and pursuits that feed directly into your writing?

Absolutely! The most useful by far has been acting and directing. This is not merely a case of learning the mechanics of theatre. In order to act well, you need to identify with and ‘believe in’ the character you’re playing. That’s a useful approach to creating and writing any character, whether in drama or fiction. There’s nothing as uninteresting as a stereotyped portrayal, particularly of a ‘baddy’.