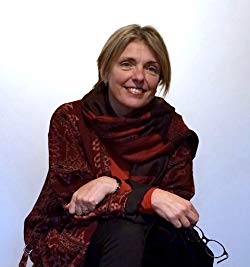 1. Csilla – you described in a radio interview that you did last year in Hungary as “a somewhat nerve-wrecking challenge” because you had to translate your poetry into Hungarian. Do you think that poetry works in translation?

Tanya, this is a challenging question. Up to the age of 18 I read world literature in translation, including Baudelaire, Whitman, Ginsberg, Heaney or Pasternak. We cannot do without translations if we want to read writers from all around the world. But I think that poetry can only be well translated by poets and it really works if there is a deep connection between the poet and the translator. Thomas Kabdebo is a fantastic translator of my favourite Hungarian poet, Attila Jozsef and I am lucky to be able to read him in both languages. The reason why I felt challenged about having to translate my own work was the fear of re-writing or fundamentally changing out of respect for my environment. The threat of self-censorship.

2. You work in many genres: poetry, memoir, short fiction, and I believe you are currently working on a novel. Are you more at home in any particular genre – do you feel that different genres can address different things?

Yes, I love exploring different forms of writing. In the novels it is almost like a journey, the characters tend to take me to places that I never thought of. In poetry the form is always an adventure and it can be very cerebral, even though we might think that poetry is closest to the soul. Since I have been writing flash fiction I discovered that there is an overlap and you can be poetic in prose. There are breathing spaces like in a poem and the silence can tell often a lot more. I am interested in the borderline as well, where the form becomes an experiment – like the biographical novel, which is a cross-breed of fact and fiction.

3. You have an extensive background in film and have won prizes for your scripts. Are you still involved in that area?

Yes, I am working with people in Hungary at the moment, but film making is such a long, tedious and risky business for the writer! She is at the bottom of the hierarchy, fully disposable and replaceable, even though everybody agrees that the script is the most important element of the whole business. I tend to apply a “let’s go and do it now” attitude. Since I discovered digital technology, I also make film poems. This is very satisfying. I can take these to exhibitions and festivals and eventually show them on my website at http://www.csillatoldy.co.uk